Yesterday ( May 10, 2008) was World Pangea day, celebrated across the world. I was lucky enough to get an entry pass to NCPA( National Centre for Performing Arts), Mumbai India. Here it started at 11.30 in night and ended at 3.30 am in morning.

I took these pictures at Pangea Day Mumbai, India:

There were various short films showcased at the event. Some of them were really very creative and some were so touching. I ll discuss a few here.

The first film showcased Mozambique and starts by showing an Aunty hanging a sweater on a rope in her house. Next scene shows kids playing Football. All of a sudden a big guy comes and takes away the football, lashing at kids, "You bloddy kids tear away all the Condoms". The ball is gone now. The kids rush to a shop, gets a condom, blows it and tie a knot. Then they cover it with paper, cloth and wrap it with a thread of sweater that was hung in Aunty's home. They keep wrapping th ball till the Sweater vanishes. They keep playing and suddenly the ball goes to Aunty's house. And to your utter surprise, Aunty starts making the sweater again from the ball. The film ends from where it started- Showing the Aunty hanging the sweater again on the same rope.

Message: The film gives the message that in Mozambique there are more than 5 million Condoms supplied every year by UN, but on an average, a man in Mozambique uses just 5 condoms per year. Most of the condoms are used by kids to play football. Now i understand why HIV/AIDS is so prevalent there.

Some other films which are really touching are: The dancing Queen( Shows dance of two fingers on a table and at the end of dance - shows a girl who is on wheelchair), The Dog(This was my favorite film- This film had a deep meaning and its ending leaves you thinking what might have happened in the end. Must see for all)

Here I wrap up my post. Pls do see all the movies at www.pangeaday.org. The movies are awesomely Thought Provoking and show the immense creative talent of short filmmakers.

Pls do leave your comment about the films- Which film you liked most and what message you took home from the films.

The most awaited StartUp chapter for Mumbai has been launched yesterday (Sat, 10 May 2008). We were a group of 40 people who met at Kohinoor Hotel, Dadar where we had two sessions- one by Preetam, CEO of Marcellus and another session on Adobe AIR by Brajeshwar. 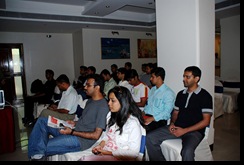 The best part of such meetups is the interaction that we have with like minded people.

Startup saturday will be held every second and fourth saturday of the month.